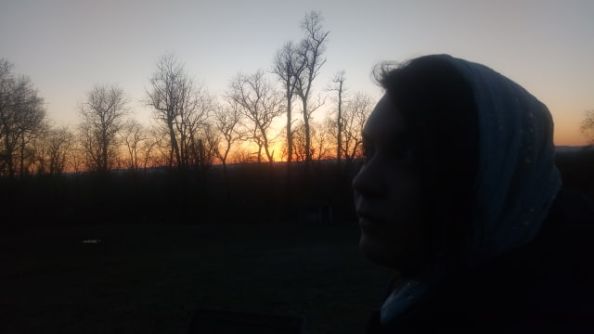 On Imbolc of this year, I performed a small ritual for myself and three others centered around Brigid, self blessings, and internal reflections on growth and stagnation. I had set up a private altar to Brigid in the ritual space, illuminated by candle flames and orange LEDs, Her statue at the center of the space. We made Brigid’s crosses before we each took turn in the shrine, seeking any messages from Her that She might offer.

It has been a goal of mine for some time now to take my priestess vows, so I was both un-surprised and delighted when I sat down to listen for messages and the date of March 23rd surfaced as my vow date. I listened for other messages and was given the task of preparing for the date by taking care of myself and setting up my intentions.

So much has happened between now and then – none of which I will write about here for it would take pages and pages. But it has been like the shift from night to the sunrise, or winter to summer. I’ve been taken, whole as I was, and been killed and reborn (see part of this process in one of my recent journeys). I am still whole, still the same, but entirely different all at once.

And so, last night, I took my vows to become a Priestess of Brigid. There were several steps taken along the way to get here – my years of experience as a witch, Druid, and earth spiritualist in general; Brigid presenting Herself to me about three years ago at Twilight Covening; the inspiration of my late best friend, Kat Savery Gray; work with Irene Glasse (of Glasse Witch Cottage) who I look up to tremendously; and centering into my sense of being a strong feminist and warrior for women’s empowerment. With all of these things done, the messages clear, and the guidance of several Priestesses I look up to tremendously, I pledged to take my vows on March 23rd, 2019.

The biggest question was where to do it. I contemplated using my mother’s property or a public park, and was already at my mother’s when I got a message from Kat’s widower, Mike Gray. He was going to be out of town for the evening and offered, unknowing about my intention to take vows, that if I wanted to come use his property for some star gazing, I was more than welcome to. Without a single hesitation, I knew this was the perfect place for me to take my vows.

Kat, who passed December 7th, 2018, had been working with Brigid for a while before and after her diagnosis. She was exactly the sort of woman Brigid would attract: strong, loving, poetic, sharp, crafty (and that word feels honestly like a downplay of Kat’s talents), musical, nature loving, and maternal. In the back of Kat’s home property, she was working, as was her husband Mike, to create a natural Brigid shrine. The property was already, therefore, charged with the intent of Brigid worship. It was a perfect place to do this work for myself.

As my partner Grace and I drove toward the property, I found myself hit with a sudden wave of strong emotions. Tears welled in my eyes and I found it hard to speak. It was no private matter that Mike Gray and I did not get along well during some of the end of Kat’s life, and here it was that he and I had repaired our relationship enough for him to offer his property to me for a nice evening. The thoughtfulness of the gesture was overwhelming. I looked to Grace and laughed with a wonder and sadness all at once, saying something like, “If this isn’t exactly the sort of thing that Brigid would arrange, I don’t know what is.”

I felt Her energy so strongly in that moment that I knew I’d come to one of those moments in my life where there’s just no doubt I’m on the right path. Brigid’s design was flowing through me.

Grace and I arrived and took in all of my supplies including my statue of Brigid. Mike had provided us with a beautiful bottle of mead and informed me that on Kat’s altar there was some water from the super wolf blood moon. I took a moment to kneel at Kat’s altar and was immediately overcome by powerful tears. I picked up the candle jar I had gotten her, placed a hand on a mala laid out on the table, and spoke to her. I had the overwhelming sense that that mala needed to be with me, so after lighting a candle for her, I took it with me.

Grace and I walked all the way to the intended Brigid shrine in the back of the property as I meditated. The space resonated with Kat’s energy, as well at Brigid’s. I felt completely at peace, even as I trekked through slick mud and past thorns.

When we returned, we built a small fire and I set up the space to declare my vows. Brigid’s statue stood on one of the stumps within the fire ring, along with the water from Kat’s shrine, and the mead. I felt slightly unsteady as I prepared, but once I moved to create the space energetically, making offerings, and intoning the intent of my work, I felt rooted and strong. I placed Kat’s mala around my neck and began.

I won’t recite my vows here by heart. I could not repeat them exactly if I tried. I called Grace and Kat as my witnesses in the moment, but, I wanted to share some of the pieces that craft the intent for my path forward. I share these for several reasons: 1) to hold myself accountable; 2) to invite others to hold me accountable; and 3) to invite those who may be in need of what I have to offer to seek me.

I vowed as a Priestess of Brigid to:

I blessed the water from Kat’s altar and anointed myself, declaring my intent and stepping into my power under the mantle of Priestess. There was no “magic moment,” no aggressive messages from beyond, but rather a sense of peace. I heard the faint echoes of a “Well done.” I anointed Grace with a prayer, and then moved to open the space.

Later in the evening as Grace and I stood looking at the stars together, I could profoundly feel what Brigid had told me in my recent journey: everything and nothing would change in taking my vows. It’s hard to explain. I’ve always been me. I’ve always had this in me. But, now I’m finally embracing it with the intent to live within the light of my truth.

No more shadows. No more hiding behind others because that’s where they want me. I stand in the light of Brigid’s sacred flame, fully illuminated as the warrior woman, the poet, the creator, the mother-like support, and Priestess that I am.