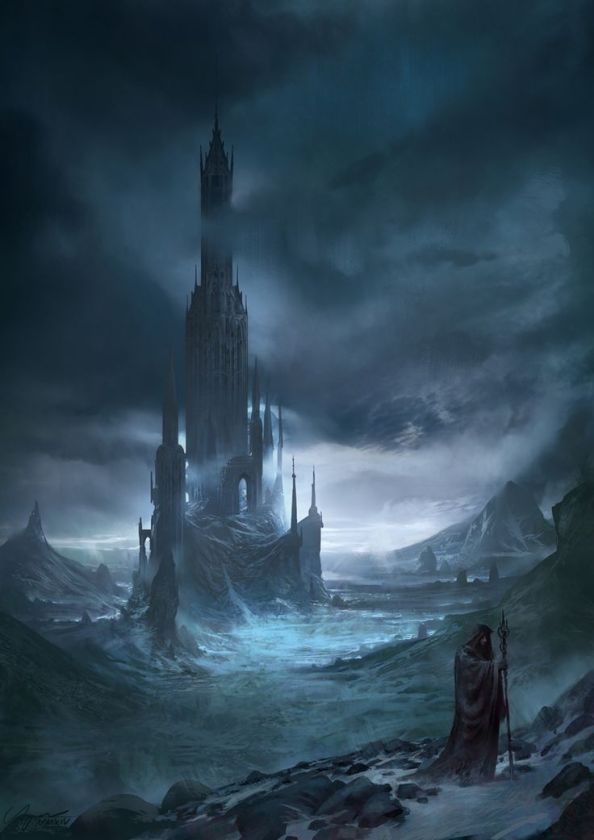 I had just finished a guided meditation to find a crystal to work with prior to this journey. However, the meditation was so dissatisfying and hollow in a way that I decided to do a journey to fill in the gaps.

As I began to journey, I found myself in my usual garden and became a pure white owl. I plucked up my new snowflake obsidian I’d found in the previous meditation, and then let it drop into my talon. Once this was secured, I flew up to see Arianrhod.

As I arrived,  she gave me a cup of mugwort tea which I drank quickly while gazing up at her castle. It was still a massive towering construction, but with several “tiers” that were more a result of it sort of wrapping like a spiral around itself. Most of the walls were covered in massive glass windows. The moon disc was just a silver ring this time, barely more than an outline depicting the dark moon.

Arianrhod then took me to a library. It was rather petite and cozy, mostly dark blue and purple with big shelves stacked with books. She picked a volume and showed me moon mansions work. Since she is a Goddess of the Moon, she seemed to be pleased this was a direction I wanted to go and continued to encourage my deep work with the moon. She told me there was a great deal of potential for very powerful magic through dedication to this work. She couldn’t convey all the words to me because I lacked the vocabulary to do so. It was almost like she wanted to cram all of the knowledge in there at once. She seemed a tad frustrated and like she wanted me to get on with it – a genuine show of impatience for me to really begin.
After showing me this book, took down another an opened it. At first, it seemed to show something I couldn’t recognize at all, but then it quickly changed to a book of “potions” or “elixirs.” It showed a picture of a bottle with stones in and around it. Arianrhod told me to make crystal elixir with citrine , moonstone, and quartz and charge for 3 days in moonlight only (though it is okay for it to catch the sunrise) so I can drink it come Friday morning. She said it would help energize me and build the intent to study.
Off topic, she acknowledged that I’m not going to eat perfect amidst all my studies here in the next little while – basically somethings got to give because I am going to be busy.
In addition, she suggested one day I might need to write book on gem elixirs, so I better practice.
We then talked talked about snowflake obsidian. She said it was grounding, but also intuitive. She explained it would help me tap into my earth star and lunar chakras, which are off the traditional list of seven. She also was content to point out that it was black and white, containing night imagery. It would connect me to the stars which represent my ideas.

During the meeting, she brought up the idea she had planted in my head (one I chose to omit from the first journey’s journal) of getting the job I wanted. She informed me it was merely a test to make sure I was not going to give up so easily. After talking with blogger MystikNomad, she confirmed this is an experience she has had with Arianrhod as well. Tests are probably something I can come to expect.

Arianrhod then told me to get super serious, and reminded me I am still wasting too much time on social media. When bringing up my business, it was suggested that I focus on that when the time comes. Until then, FOCUS!
Another suggestion she gave me was to wear moon / night colored clothes if i get new ones. Embody the night.  This seems to be a part of my divine feminine expression as well.
As I mentioned before, one of my power animals has come back since I started working with Arianrhod. Shayva, my owl, used to be a brown owl, but, she went through a transformation into snowy owl between now and then.  Shayva showed me her killing a mouse, burying it, and then flying away. In words, she was demonstrating what I need to do. She went through the process of killing her past, burying it, and then soaring through the skies on to new ventures.
Before I left, I got the sense that I’m on the right track with lunar studies, but again, I need to stick with it. This is literally only the beginning: a dabbling that will set me up for more intense work.
After this, I went back down to meet briefly with Komodo, but was falling asleep. Thus, I just spent time with him.

When I snapped out of the journey, it was as though everything Arianrhod had said was still fresh in my mind, despite me dozing with Komodo!